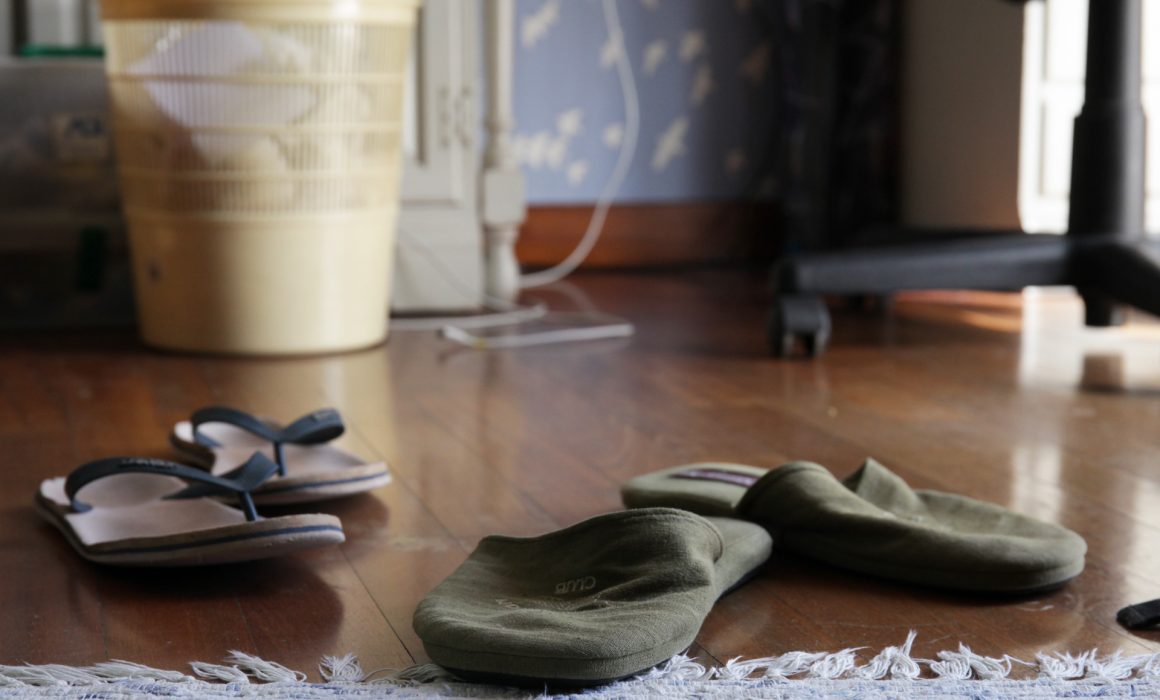 Today marks one month since I got back to Italy. One month of this weird, unwanted social experiment. In truth I was in quarantine also in Brazil for the last 3 weeks, but it didn’t feel the same. This is the real shit.

I know a month inside is less than most of you have already done. I’m still the fresh one…

However, in my defence, I can say that I’m also in one of the world’s strictest quarantines. Here in Italy you’re only allowed to go out within 200 meters from your house and exclusively to the closest supermarket or pharmacy. This at least until tomorrow, then we’ll be able to go for a run, a walk, to meet a relative or take away a pizza – yep, so far I haven’t had a pizza yet.

Quite a few people empathised with me, saying that it must be really tough for me this situation given my usual lifestyle of “not being able to stay in a place for 5 minutes”. Well…yes.

It was almost a year that I was homeless – although I prefer nomad. I had managed to kill the word “routine”. For me it was a change even the idea of sleeping in the same place for more than a few days in a row…but it’s not just this.

I was used to being surrounded by people all the time, to meet new people every single day. Then I suddenly passed to a drastic two weeks of self-isolation and now I’m just with my parents. I’m back living with them after 12 years, in a room where the clock seems to have stopped back then. It’s full of old, useless stuff – my actual stuff is in a friends’ house in London.

I’m in the place city I grew up, but where I don’t belong anymore. I’m “staying home”, but this is not my home. In fact, I don’t even know where the fuck my home is.

Said that, in all honesty it hasn’t been that tough. I’ve been doing what I’m best at, keeping myself busy. I’ve never really despaired or given up to boredom. I’ve never been laying on the bed staring at the ceiling or looking melancholic outside the window.

As I also wrote in my previous post, I’ve been trying to do as much as possible, to take advantage of this time, to be productive…well at least I tried. I did get bored sometimes and did stuff like this below. Surely I could’ve played a bit less Candy Crush, checked fewer memes and not overslept that much, but I cannot deny that this situation is depressing as per everyone. I’m now in a phase of acceptance, but for the first 2-3 weeks I kept having waves of depression, regrets for not having stayed in Brazil and rage…I mean the rage continues, but that’s mostly because of the internet connection. Italy confirms being the worst country in the world for internet connection.

All times are approximative, I’m not that crazy and I just had the idea to make this graph a few days ago. So I haven’t been counting things as I was doing them – except for the hours working which I was billing to my clients of course. Although I have to say that not all the time under “working” is paid work (this month went well, but not that well…). I also counted some work I did for myself (such as the portfolio) and some accounting and admin stuff.

Secondly, as you can see I’ve never been cooking, housekeeping or shopping. That is not inaccurate, I actually haven’t done anything of that. I mean…I put twice the dirty clothes in the washing machine and once I was about to clean my room. But then I went exercising first and when I got back to the room I found my mum finishing to clean it.

I know I’m a shit. But well, that’s the perk of living with your parents after so many years. In exchange I give them the joy of my presence hahah
Although, seriously I should start doing something… 😕

I mentioned exercising. Well if you please pay attention to the graph, I’m quite proud of it.  I’ve been exercising everyday since I got here! I do about an hour and so of fitness exercises in the morning (mostly using the Nike Training Club app, I’d recommend it) and I do exercise bike every evening for 45/50mins – depending on the Netflix episode which I watch while cycling.

Then sleeping. I normally hardly sleep more than 5 or 6 hours, but this month I slept quite a lot, especially in the beginning. That’s because I was enjoying the large double bed after months in shitty hostel’s bunk beds with people making noise around in the morning. Plus even now I don’t feel like I have to rush out of bed in the morning as I’ve got all day (and all days) to do things.

Ok, I was not going to speak about all the other points as well, but I’m gonna do it now. I feel like writing…

News. I do read a lot of news, I know it’s not recommended to do it as it would make you feel depressed, but I’m not the person who gets impressed by this and I have to be honest, I like it. I know it’s a tragic situation, but I just like knowing about things happening and in the past two months a lot has been happening all over the world. In April the situation became a bit more stable, but in March it was amazing. Everyday a new country was shutting the borders, a new company was failing, new stats, new graphs, new deaths, new measures from governments. Everyday there is an amount of breaking news that you’d see in 5 years of peacetime. It’s the war between humans and a pandemic, it’s horrible like every war, but it’s fascinating. It is history happening in front of our eyes.

Moreover, I normally follow the politics of Italy and the UK, but when I was in Brazil I started following the politics there, which is really fucked up with that delinquent of Bolsonaro. So I’ve now added another country to my watchlist, it’s a lot of news. Then of course…how not to follow what Trump is saying.

Eating. I increased the time I’m eating (as well as the amount unfortunately) since I finished the self isolation on the 18th. From that day I joined my parents for lunch and dinner and sometimes these meals go on forever. My mum is exactly what you would expect from a Southern Italian mum. She’s cooking everyday new dishes, always displaying on the table all the goodies which are in the fridge (and they’re a lot), baking cakes and different sweets almost daily, offering her homemade liquors…she’s literally feeding the pork. That’s why even if I do all those exercises when I weighed myself last week I had already gained 4 kilos (in 3 weeks). 😬

Candy Crush. There is not much to say. It’s stupid and it’s the only game I have installed on my phone, I don’t know why I waste time. Although I love laying down for a bit after lunch and I’m no good at taking naps, so here it is.

Social media. It’s mostly about watching memes and stupid videos. I used to watch Instagram stories, but I gave up with that as I’m tired of quarantine stories. Yes, you’ll be back on that fucking TBT beach and will hug again your friends when this is over. Of course the cake you made is great, that changed my day. You are amazing doing that fucking plank and I appreciate that you had to do 3 times as the phone was not placed properly in the previous attempts. Ah…and by all means I’m going to squint my eyes to check who’s in those little boxes of your 10-people-multi-call. Couldn’t care less, honestly.

This brings me to the next point which is video calling. I started doing video calls with my parents when I first moved to Rome and I have hated them since then. I regularly do video calls for work (that’s the compromise of working remotely), but I stopped video calling my parents years ago, when we passed to the more practical Whatsapp (audio) calls. Don’t need to see the faces. But here we go. We need a bit of social life, it’s 2020 so what do you do…video call.

I have to say that I’m one of those fuckers who actually organises the multi-calls. I do it as I want to see my friends, but then when it starts it’s always the same sad feeling…It’s not like being all in the same room. Firstly, it always feels like a work call, I feel like taking notes (sometimes I even spontaneously take the pen and pad in my hands). Secondly, of course the delay, those fractions of second (or even entire seconds, depending on the connection) of delay. That is so annoying. Then the third problem, which I believe is the main one. A problem which gets bigger with the number of participants: you have to speak one by one. How many times do you meet 8 friends and you speak one by one? Never.

Ok maybe sometimes one person can tell a story and everybody listens for a few minutes, but usually when 8 friends meet up they would be talking in smaller groups of 3, 3 and 2, or 4 and 4 or even 2, 2, 2 and 2. Social life unfortunately doesn’t work like a video call, but that’s what we’ve got and it’s better than nothing. At least you can change the backgrounds in the video call.

Watching TV. As you can see in the graph that started on the 18th when I finished the self isolation since only then I’ve had access to a room with a TV. I just watch the news while eating and sometimes some journalism shows in the evening.

Decorating my room. That happened only in the beginning as there were a few posters falling down so I decided to stick them back properly, plus there were some other posters which were really really shit, so I had to replace them. You can see the walls from the pic below. I don’t like Green Day, Dragonball and The Simpsons that much anymore, but that’s what was passing through my mind when I was 14.

Finally writing on the blog, editing photos, playing guitar and creating useless stuff are quite explanatory. Among the latter I include the running bar graph above, but also some other shits which are not worth sharing with the world. Although if you really arrived reading all this shit until here, I might share them with you as that means you really have nothing to do.